Home » Nieuws » Overig » The food matrix: food is more than the sum of its nutrients

The food matrix: food is more than the sum of its nutrients

Nutrition research is increasingly often focused on the health effects of whole food products. In fact, a food product as a whole is more than the sum of its nutrients. In science this is called the food matrix.This report provides the latest scientific insights with respect to the matrices of milk, yoghurt and cheese.

Food-epidemiological research studies the relationships within population groups between the food intake and the effect on non-communicable diseases or health risk factors, such as increased LDL cholesterol or high blood pressure. Researchers determine themselves whether they study the relationship between the health effect and a food product or a nutrient. In the past, most epide- miological research used to be focused on relationships between nutrients (such as calcium, protein or saturated fat) and health. In the last few years, the focus is increasingly shifted towards whole food products, for instance milk, yoghurt or cheese, when dairy is concerned. This change of focus leads to new scientific insights. For example, for some food products the expected negative effects of salt and saturated fat on health cannot be found. On the contrary. Just like bread, which has a relatively high salt content, and some dairy products, these products appear to have a protective effect against some non-communicable diseases.

The fact that there is a relationship between the intake of saturated fat and a rise of LDL cholesterol levels is generally accepted. LDL cholesterol is a risk factor for cardiovascular diseases. As full-fat dairy and cheese contain relatively much saturated fat, the conclusion that full-fat dairy and cheese increase the risk of cardiovascular diseases is easily drawn. In the previous Dietary Guidelines (Dutch Health Council, 2006), this conclusion was converted into a recommendation to consume less than 10% of the daily energy intake in the form of saturated fat. Therefore, in 2006 the advice in connection with dairy was to choose for skimmed dairy products in the diet. This advice was based on the idea that the health effect of a food product is the result of the sum of the effects of the nutrients present in this food product.

During the last decade, more studies were published that looked into the health effects of food products as a whole. Here think of the effects of milk, yoghurt or cheese on cardiovascular diseases. Contrary to what was to be expected based on the presence of saturated fat (and salt in cheese), no relationship was found between the intake of (full-fat) dairy and an increased risk of cardiovascular diseases. On the contrary, if relationships were found these showed that these dairy products have a protective effect. These relationships were explained in the Background Document Dairy of the new Dutch Dietary Guidelines of the Dutch Health Council (2015). In this document, the following conclusions were drawn with respect to the relationship between dairy intake and cardiovascular diseases:

There are various explanations for the discrepancy between the health effects of the sum of nutrients and those of dairy products as a whole. One of these explanations can be found in uncertainties in epidemiological research. Epidemiological research often finds non-causal connections. Therefore, it does not make sense to follow just one single study when defining the dietary guidelines based on epidemiological research. The chance of finding a causal relationship based on epidemiological studies grows when more studies give the same results and these studies have been corrected for disturbing factors, such as lifestyle, age and eating habits, as much as possible. When sufficient studies have been published, these can be put together in a meta-analysis. In case of a lot of evidence at meta-analysis level (and when there may possibly also be a dose-response effect), the evidence is interpreted as being high and then there is a considerable chance of a causal relationship.

When too few studies are available to draw conclusions about associations with a high evidential value, there is a chance that the connection is not causal, but that here so-called confounders are involved. These are factors that disturb, cause or even turn around the causal connection. In this way, people who pursue a sportive lifestyle, eat healthily and have no overweight may happen to be the ones who consume a lot of milk or cheese. The Dutch Health Council is convinced that hardly any confounders are involved in the connections between dairy consumption and a lower risk of colorectal cancer and type 2 diabetes. Now that other health effects than expected are found in the consumption of dairy products, a new question arises based on the nutrients present, being ‘Why do dairy products protect against cardiovascular diseases despite the fact that they contain saturated fat and, in the case of cheese, even a substantial amount of salt?’

Publication of the dairy matrix

Is it possible to explain the ‘surprising’ health effects of dairy described above by the matrix effects? This was discussed in a multi-day workshop attended by 18 international scientists of different disciplines in Denmark late 2016. The objective of the workshop was to more securely define the term dairy matrix and to get an overview of the knowledge gaps. These may then serve as a source of inspiration for further research into the dairy matrix. The results of the high level workshop were recently published in the American Journal of Clinical Nutrition.¹ The publication in this renowned journal shows that there is a broad support base among fellow scientists about the findings concerning the dairy matrix. 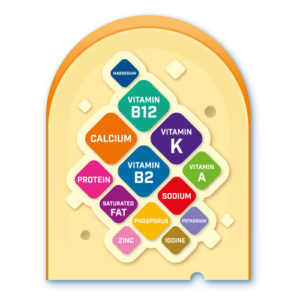 Dairy products differ from each other with respect to nutrients and structure. Although cheese has a high fat content, the further composition of cheese is more similar to that of yoghurt and milk than to that of butter where protein, vitamins and minerals are concerned, of course with different amounts. The fat in dairy cannot be considered without taking the biological membrane that encloses the fat drops in milk, the milk fat globule membrane (MFGM) into account. Yoghurt and cheese are both fermented dairy products with bacteria that possibly produce bioactive peptides and short-chain fatty acids (SCFAs). When looking at the structure, cheese has a solid structure, yoghurt a gel-like structure and milk a liquid structure. Due to the different production processes, many other differences can be mentioned. Because of the differences in composition and structure of dairy products, the participants of the dairy matrix workshop thought it to be likely that other health effects from dairy products can be expected than from the intake of individual nutrients.

A good example of a matrix effect is the difference in the health effects of calcium in the form of a supplement and calcium present in dairy. In the Background Document Food Supplements for the Dietary Guidelines, the Health Council of the Netherlands has studied the effects of calcium supplements on health. The conclusions are given below.

When comparing the effects of calcium supplements with the effects of dairy, it is notable that supplements (so only calcium) increase the risk of cardiovascular diseases and raise the risk of intestinal cancer with elderly people. This while dairy intake is particularly associated with a lower risk of cardiovascular diseases and intestinal cancer.

Similar differences in health effects are also observed for saturated fat and full-fat dairy, as described at the beginning of this article. How can the dairy matrix explain these differences? A possible explanation is that the concentration of blood lipids drops because of a decrease of the fat absorption in the small intestine. There are indications that calcium, phosphorus, milk fat globule membrane (MFGM) and starter cultures in fermented dairy products have influence on the blood lipids response by saturated fat. During the matrix workshop it was suggested that the MFGM may play a role in the regulation of the blood cholesterol. This justifies a plea for more studies in this area. 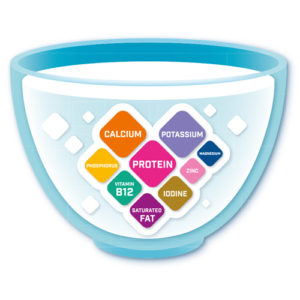 Apart from the interaction between nutrients, the structure of a food product may have an effect on the absorption of nutrients, saturation and/or other health aspects. For instance, the consumption of yoghurt or drinking yoghurt takes away the sense of hunger more than the consumption of milk-based drinks or fruit drinks does. This was shown in a comparative study in which the appearances and energetic values of the products resembled each other as much as possible.² More such matrix effects due to the structure of dairy have been described in literature, such as the different effects of various protein sources (dairy, meat, fish, egg and plants) in connection with the risk of type 2 diabetes.³

There seems to be sufficient evidence that the dairy matrix shows specific health effects that cannot be explained by the individual nutrients from dairy. For instance, full-fat dairy consumption has an effect on maintaining a healthy body weight and lowers the risk of cardiovascular diseases, type 2 diabetes and poor bone health, which effect cannot be traced back to nutrients. There are indications that the structure of dairy products causes interactions in the dairy matrix that may lead to various positive metabolic reactions. The 18 scientists who participated in the workshop about the dairy matrix reached the following final conclusion: The nutritional value of dairy products is more than the sum of the nutrients. As there still are many knowledge gaps, it is desirable to do more research into the area of the food matrix. Dietary guidelines must be focused more on health effects of food products as a whole instead of just nutrients. A nice example of this are the most recent Dutch Guidelines for a Healthy Diet from 2015.